The house was built for Frances Sayle in 1907. Frances was the daughter of Robert Sayle, a local entrepreneur, benefactor and philanthropist. Robert Sayle established a drapery store in Cambridge in 1840 which ultimately became the Cambridge branch of John Lewis. Robert introduced a range of innovative retailing techniques, partly based on his experience in London. Robert was also instrumental in a wide range of public-spirited initiatives and civic activities, including women's education, acting as guarantor for the new YMCA in 1870, contributing to local alms houses and much more.

Sayle House is located in a quiet cul-de-sac which was built on orchards tied to nearby Chesterton Hall, which still exists today. It can be found next to the roundabout at the junction of Chesterton Road and Elizabeth Way. Chesterton Hall was built by Thomas Hobson, renowned for the infamous "Hobson's Choice". 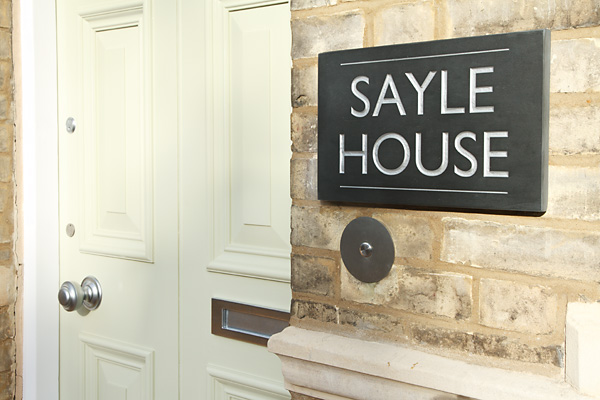 Chisled slate sign at the front door of Sayle House.

This email address is being protected from spambots. You need JavaScript enabled to view it.